Retail ownership of top 500 stocks of BSE saw a sequential decline in December quarter. Is their interest waning? 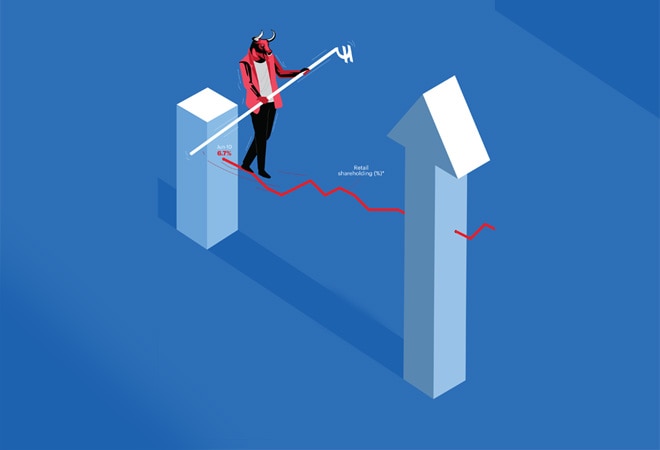 Stock markets have had a stellar run since their lockdown lows, with the BSE Sensex rising from 25,638 at the peak of the crisis in 2020 to 52,516 in mid-February 2021. Since then, it has been a slow grind, with the index hovering around the 50,000 mark. One of the clearest signs of the earlier euphoria wearing off is the dip in retail ownership of BSE 500 stocks. Consider this. There has been a decline in retail ownership - those holding up to Rs 2 lakh nominal capital - in three out of five stocks in BSE 500 in December quarter. In fact, overall retail ownership of BSE 500 stocks fell from 6.9 per cent in September quarter to 6.8 per cent in December quarter. Individual investors had increased stake in almost two-third (338) companies in July-September. This fell to 207, or 41 per cent, over the next three months.

This shows falling retail interest in these sectors, but some experts say there is not much to worry, at least yet. Nirali Shah, Head, Equity Research, Samco Securities, says, "Private sector banks have experienced a tremendous rally in the past few years. Their composition in the index has increased starkly. Therefore, a dip of approximately 30 bps in a quarter, be it due to expectations of asset quality deterioration or rising NPAs or collection efficiency, isn't worrisome. In other sectors, too, short-term declines were due to a number of sector specific reasons such as M-o-M sales dip or rise in commodity costs."

Some say the trend is a part of rebalancing that markets keep going through from time to time. Gurpreet Sidana, Chief Operating Officer, Religare Broking, says, "The institutions (FIIs and DIIs), in order to safeguard their investors' portfolio, substantially reduced exposure during the crisis, which ended up in hands of retail investors. The substantial increase in new and dormant investors also resulted in rise of retail participation this time. Lack of enough investment avenues due to underperformance of other asset classes such as real estate, gold, etc, also pushed investors to equities. Now, as tables are turning, with strong buying interest from institutions, especially FIIs, a moderation in retail holdings is natural."

There is another reason, says Nirali Shah of Samco Securities. "Sebi's new peak margin framework has definitely led to reduction in volumes." In order to prevent brokerages from offering excessive leverage, Sebi has mandated 25 per cent of peak margin in traders' account. According to the norms, brokers will not calculate margin based on the end-of-the-day position but on the intraday peak position. A clearing corporation is now required to inform traders and investors about their margin requirements at least four times a day. The highest out of these four will become the day's peak margin.

Will we see a similar trend? It depends on the market structure, says B. Gopkumar, MD & CEO, Axis Securities. The global financial crisis was followed by huge investments by FIIs. A similar trend is visible now with FIIs pumping in $34 billion into andar bahar gamen equities this year. "If the pace of FIIs inflows continues in the coming months, we could see a further decrease in ownership of other participants (mutual funds, retail) of the market," he says, adding, "Given the weakening dollar, higher fiscal spending and low interest rates, emerging markets will continue to see FII inflows, and andar bahar game will likely be the biggest beneficiary on account of faster-than-expected economic recovery and positive earnings momentum."

However, Shah of Samco says it will not be ideal to compare a pandemic to a financial crisis. Retail investors turned gung-ho on equities at depressed prices during the 2008 crisis. Higher valuations led to decline in share of retail investors, who believed markets might not go up and, hence, booked profits. "Both situations are different. With Sebi's new margin norms coming into play, retail participation could experience a slow dip," she adds.

The FY22 Union budget met market expectations. Quarterly commentaries from managements are upbeat, showing a robust outlook for earnings. "So far, earnings upgrade momentum is higher than the downgrade momentum," says Gopkumar from Axis Securities. However, the current rally is built on expectation of a sharp recovery in corporate earnings, and if it falls short, markets may struggle to remain at higher multiples.

Going forward, the future of retail participation will depend on factors such institutional positioning, interest rates and market valuations, says Sidana from Religare.